The Future of Hospitals: Virtual, Vacant, or Vacuous?

Hospitals today face major challenges from payer mandates, charitable care mandates, the uninsured, and physician groups that compete for profitable services. Many hospitals also have bloated administrative structures that make them slow to adopt productivity-enhancing measures that could lower costs, reduce errors, and improve patient outcomes. The Affordable Care Act (ACA) forces hospitals to rethink their approach to health care delivery as it shifts Medicare and Medicaid reimbursement from a focus on quantity to a focus on quality.

A divisive conflict of interest lies between their responsibility to provide charity care and social services on one hand and seek to maximize profits on the other. U.S. health care spending is more than $3 trillion annually, with hospital revenues larger than the entire Pentagon budget (Martin 2015). Since over half of hospital revenues come from Medicare and Medicaid, congressional budget committees will continue to pressure hospitals to become more efficient (fig. 1). The Medicare age population will account for 20% of the U.S. population by 2030, thereby worsening hospital revenues by shifting the mix away from commercial payers and toward government payers, which are not profitable under a fee-for-service model (Crapo 2014). Medicare margins have trended lower since 2000, with hospital inpatient margins at -6% and outpatient margins at -12%.

Hospitals that continue doing business as usual are expected to have -15.8% profit margins by 2021 (Crapo, 2014). It now costs $226 billion annually to treat Alzheimer’s disease; by 2050, that number will surge to $1.1 trillion, with Medicare and Medicaid payments accounting for nearly 70% of the cost (fig. 2). Cumulative costs to treat Alzheimer’s disease are estimated at $20.8 trillion in 2015-2050 (Alzheimer’s 2015). The ACA incentivizes hospitals to using technology to deliver smarter care (Sebelius 2013). To survive, hospitals in the future will have to be lean, green, and digital, using technology to improve patient outcomes while also protecting the health of large populations. 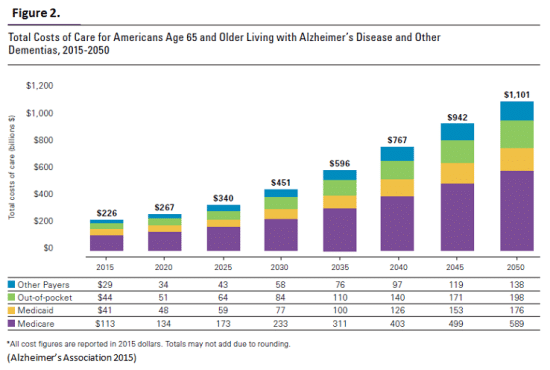 Hospitals represent the pinnacle of American innovation, wealth, and capitalism, yet they also function as social service organizations that provide charity health care and, in many cases, also act as social safety-nets. Today the largest share of U.S. health care dollars, some $972 billion annually, goes to hospitals. Hospitals were not always such enormous business enterprises. In the eighteenth and nineteenth centuries, hospitals were public institutions that primarily housed the poor, the mentally ill, or those with communicable diseases. Later, various religious organizations founded charity care hospitals. After World War II, hospitals shifted from charitable care institutions to profitable health care delivery when the Hill-Burton Act of 1946 provided federal incentives for hospital construction. More than 4,600 hospital projects began over the next 20 years, and hospital admissions rose by 26% from 1946 to 1952 (Sultz 2014).

Postwar tax incentives to increase private health insurance, along with Lyndon Johnson’s “Great Society” program that created Medicare and Medicaid in 1965, led to an increase in hospital admissions. Republicans favored Medicare legislation due to concerns regarding “the nation’s oversupply of hospitals” following the Hill-Burton Act building boom (Sparer 2011, p 28). Medicare’s assurance to reimburse hospitals based on “reasonable costs” started a cost spiral, since “reasonable costs” were not well defined (Sultz 2014). Average daily patient hospital costs doubled between 1966 and 1976. (Stevens 1989).

By 1970, Medicare hospital expenditures were 87% higher than initially projected in 1965, and nearly 66% of the increase was attributable to “massive expansions in hospital payroll and non-payroll expenses—including ‘profits’” (Stevens 1989, p 286-7). Community hospitals that were “controlled by community leaders and were linked to the community’s physicians to meet community needs” accounted for 82.2% of all U.S. hospitals, 52% of all hospital beds, and 92.1% of all hospital admissions (Wall 2016;). By 1971, prices for hospital services were subject to the Nixon administration’s wage and price controls, which severely pinched hospital profits (Wall 2016). Following the squeeze on hospital profits in the 1970s, trends towards managed care and competition characterized health care administration in the 1980s. Medicare began to pay preset amounts for specific diagnoses, and was thereby able to incentivize better care. The result was shorter hospital stays, as hospitals were encouraged to discharge their patients sooner, to maximize payment. Many community hospitals could not compete with expanding for-profit hospital networks, and more than 600 community hospitals had to close (Wall 2016).

Health costs continued to burgeon into the 1990s and the power began to shift toward large purchasers of care, such as health maintenance organizations (HMOs). In the Balanced Budget Act of 1997, Congress cut $115 billion from Medicare and Medicaid, reducing some payments to below the cost of treatment (Wall c2016). This caused more care being provided at lower-cost hospices, nursing homes, and outpatient clinics. Competition from doctor-owned diagnostic centers and surgi-centers added to the losses of community hospitals (Sultz 2014). From 2000 onward, the government’s focus has been on health information technology as a way to reduce costs, coordinate care, and improve patient outcomes. As a first step, the government provided reimbursement incentives for adopting certified electronic health record (EHR) technology in 2009, and began charging penalties for EHR non-compliance in 2015.

Thomas Frieden, director of the Centers for Disease Control and Prevention (CDC), says that the fields of medicine and public health are “inevitably and increasingly interdependent,” noting that a patient-centered, team-based focus with support from information technology is the best way to improve health outcomes (Frieden 2015, p 1748). The fields of public health and medicine will have to join forces as retiring Baby Boomers place increasing stress on the entire health care system. Without a large scale focus on preventive health, the projected costs of treating diseases of aging and chronic illness will outstrip the government’s ability to compensate providers—even with technology reducing costs.

Many hospitals have responded to government quality reimbursements by setting up Accountable Care Organizations (ACO) and the Patient Centered Medical Homes (PCMH), where doctors focus on preventive health and keeping patients out of hospitals. There are more than 744 ACOs nationwide, including over 200 hospital-sponsored ACOs, which provide care to more than 23 million people (Tu et al. 2015) The ACO is important because it gives health care providers incentives to keep patients healthy. During the first year of the ACA’s implementation, the number of ACOs doubled, with hospital-sponsored ACOs outnumbering other sponsors by two to one. In 2012, ACO growth nearly tripled, with physician groups sponsoring more than half of new ACOs (Muhlestein 2013).

Safety-net hospitals that provide charity care for undocumented immigrants and the uninsured face serious challenges due to the costs of implementing EHR technology and a $35 billion reduction in Disproportionate Share Hospital (DSH) allotments in 2017 to 2024 (Brino 2014). The government justifies the DSH payment drop, noting that more people will qualify for Medicaid coverage. However, more than 23 million people are expected to remain uninsured in 2019, not including undocumented immigrants or legal immigrants not eligible for Medicaid (Coughlin et al. 2012). Since Medicaid is administered through the states, there is concern that states may reduce their funding for safety-net hospitals. The ACA imposes penalties for hospital readmission within 30 days, which is a concern for safety-net hospitals. A survey of five large urban safety-net hospitals showed that health information technology and system integration improves care delivery and reduces hospital readmission rates. (Coughlin et al. 2012). 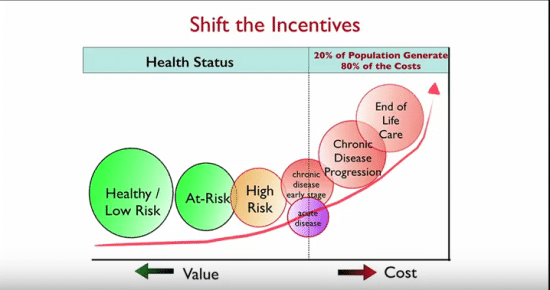 What Will Hospitals of the Future Be Like?
• Lean, Green, Digital
• Patient-Centered
• Shift from Sick Care to Preventive Care
• Focus on Population Health

Hospitals in the future will have to use technology to position themselves at the crossroads of public health and medicine as they shift their focus from sick care to preventive care to contain costs and save lives. The ACA’s goal is for the patient to spend minimal time in higher-cost settings, such as a hospital, with maximum care coordinated from home using digital technology. Will this possibly usher in the age of telemedicine and virtual hospitals? The ACA now incentivizes hospitals to use technology to coordinate patient care and improve the individual patient experience. However, as hospitals adjust to the new “plug and play” virtualization of the health care system to treat patients individually, they should not lose sight of the critical role of public health and the ability to save lives by the millions. The ACA may not be perfect, but its focus on value-based care and patient outcomes is a serious attempt to help hospitals stay relevant by encouraging them to become more active players in public health.

Previous Article Psychiatry’s Trek Through Madness, A Book Review of Shrinks: The Untold Story of Psychiatry
Next Article A Possible Link Between Prescription Painkillers and Heroin Use
Medical Dialogue Reviewis is a peer-reviewed journal which aims to reflect the diversity of medicine by enabling students to publish their articles and artwork on healthcare.