The Extent of Medical Magic

Hyperbaric oxygen therapy (HBOT) through pressurized chambers is a relatively new medical treatment that aids in cellular recovery and restored neurological function through the utilization of blood flow. The therapy involves the inhalation of 100% oxygen for short periods of time in either a pressurized chamber or through a tube. Air pressure is increased three times higher than the standard atmospheric pressure.1 This increase in pressure allows the lungs to receive more oxygen and allows the oxygenated blood to circulate throughout the body to fight bacteria and stimulate healing through the release of growth factors and stem cells.1 Although HBOT and the concept of pressurized treatment have been employed for years,2 hyperbaric therapy has yet to gain the research and consideration as a treatment option that it deserves.

Hyperbaric medicine was initially utilized after the realization that it enabled stem cells to accumulate in injured areas and assist in the generation of new cells. HBOT was primarily used for divers suffering from embolism (“the bends”) after spending too much time underwater. Embolism causes air bubbles in the bloodstream.1 The benefits of HBOT became increasingly apparent following research on the effects of the treatment on injured athletes. These athletes, who suffered major injuries, recovered quickly and efficiently after receiving the therapy. HBOT increases white blood cell activity at wound sites, increases oxygen tension in tissues lacking oxygen, and can lead to the formation and opening of blood vessels.

The mechanism of HBOT uses dissolved oxygen to saturate the circulatory system and provide even oxygen distribution.1 The delivery of oxygen through hyperbaric medicine is a relatively simple procedure that may be used as either a direct treatment or as part of a comprehensive treatment plan. The body delivers oxygen to different cells in the body via hemoglobin molecules. Hemoglobin and oxygen uptake is limited by the number of red blood cells present in the bloodstream. However, wounds and injured tissues require an increased amount of oxygen than the base standard.2 Patients are either placed in a one-person unit or a multi-person room and can receive oxygen through a mask, hood or laying on a table which slides into a plastic tube.1,3 These spacious chambers allow patients to watch movies or listen to music during a treatment, which typically lasts two hours. Like all procedures, HBOT involves certain risks such as ear injuries or in extreme cases, lung collapse due to pressure changes or seizure due to oxygen toxicity.1,4 The treatment itself is highly individualistic and involves monitoring and assessments of each patient’s clinical condition. This is important for patients with the types of injuries HBOT can treat because it provides a relaxed, therapeutic environment tailored for personal needs.

To date, the FDA has approved thirteen conditions for which HBOT is a treatment option. These include non-healing wounds, carbon-monoxide poisoning, chronic-radiation injury, stroke, and brain abscess.1,3,4 Research has been done testing the effects of HBOT on other illnesses such as Alzheimer’s Disease and cancer but there is a lack of evidence correlating HBOT and improvement.1,5,6 For this reason, the FDA explicitly outlines that for such conditions, HBOT is not guaranteed as an efficient treatment and should not be considered as a cure in all circumstances but rather as a treatment option to relieve pain or curtail the symptoms of an illness.2,5 Additionally, although many insurance companies and Medicare/Medicaid follow the guidelines which have FDA approval for HBOT, the availability and coverage of HBOT is not well conveyed to clients.6 Due to its limited extension, few hospitals have hyperbaric facilities, making it less accessible and causing referrals for the prescription of HBOT to be difficult to acquire. 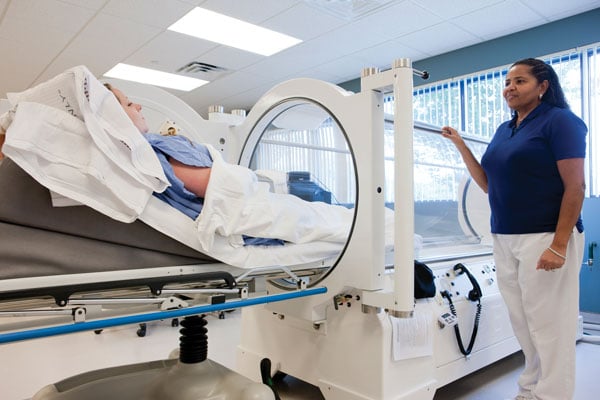 Another more subtle drawback of hyperbaric medicine is its lack of research—a costly and limited endeavor which could otherwise highlight awareness and the potential to develop new treatments for illnesses. The ability of HBOT to deliver supplemental oxygen has increased research on whether additional oxygen could either promote or suppress cancer. The role of HBOT in healing wounds has also increased speculation that it could stimulate tumor growth. Similarly, predicting the outcome of treatment for brain injury and stroke is problematic as prognostic tools are not precise enough to determine long-term function of patients. Function also corresponds with age, medical history, and neurological deficits, which makes each case distinctive in terms of the intensity and duration of HBOT implemented. Though the redirection of oxygen flow to ischemic tissues is known to aid recovery, it is difficult to determine whether HBOT can directly improve recovery at a cellular level.7 For this reason, clinical methods must be constructed to assess the cellular progression of each patient. The bottom line is that tumor oxygenation and the effects of hyperbaric medicine must be explored intensely and funding must be allocated to make this research possible. To explore hyperbaric medicine more intensely, larger trials can be used with representative samples consisting of individuals with different forms of cancer or different degrees of certain illnesses deemed treatable by HBOT.

Policies can be adjusted to combat flaws in design and small sizes in observational studies that have prevented the provision of a clear relationship between HBOT and improved function for certain conditions. Obstacles to research involve the absence of a set dosage/duration of treatment, a lack of reliable data, and previous patient unwillingness to be placed in placebo groups.7 To overcome these difficulties, dose-range studies should be performed in compliance with the FDA and individualized studies and conditions, monitoring of patients post-treatment should be increased, and organ system functioning should be assessed against a standardized basis.7 Also, rather than providing placebos, treatment groups can vary based on random assignment to groups of immediate or delayed treatment and varying prescriptions of HBOT in conjunction with better reporting and patient sampling.

In a particularly recent case, a study performed to evaluate the effectiveness of HBOT for treating post-stroke victims led to a successful result. In a study published in 2013, neuroscientist Shai Efrati tested HBOT on over seventy people who previously had strokes.8 Efrati provided half of the patients with HBOT for forty sessions consisting of ninety minutes while the other half received delayed treatment for only two months. All patients were randomly assigned to treatment groups and the brain activities of patients receiving immediate treatment were assessed before treatment and following forty sessions. Patients receiving delayed treatment were evaluated before treatment, after two months without treatment, and two months after forty sessions.

The results showed that patients that received HBOT earlier, and therefore for a longer period, experienced significant improvement in movement, sensation, and language skills regardless of when they first suffered from a stroke.8 Moreover, the group of patients receiving delayed treatment exhibited no neural improvement in the control period until the onset of treatment. Neurological function was boosted as the tissue surrounding dead tissue impacted by damage had regained firing potential and neural activity was detected by CT scans. This shows that HBOT has the ability to restore nerve endings and promote cellular healing in individuals with traumatic brain injury and other conditions, though this was a single study and the aspects of HBOT would be better represented with extensive case studies.

In summation, it must be emphasized that hyperbaric medicine has the ability to enhance the healing process of the human body through the provision of additional oxygen from a chamber consisting of atmospheric pressure. Oxygen flow has been proven to increase, allowing tissues to saturate while simultaneously preventing the leakage of blood plasma and enabling cell restoration. Oxygen dissolves into the body’s fluids, plasma, bones, and any other areas that lack adequate circulation and permits white blood cells to accumulate and attack antigens. With this in consideration, rather than allocating funding and research to pharmaceutical manufacturers, funds and proper attention must be provided to developing treatments like HBOT. Hyperbaric treatments are typically $100-200 per session and individuals must consult with insurance firms to determine coverage. Also, hyperbaric facilities charge significantly less than hospitals providing the treatment and the most cost-effective option for patients is to get a treatment package rather than paying for individual sessions. Insurance companies only cover certain conditions, some of which, as required by Medicare, must be provided in a hospital. However, HBOT is relatively inexpensive compared to the use of physical therapy and follow-up visits to hospitals for other treatments. The issue is that since HBOT is non-patentable, HBOT research is only funded by nonprofit organizations and hardly marketed. Its low cost would have a deep financial impact on healthcare as hospital stays would be reduced due to direct treatments provided by facilities rather than several evaluations by different specialists that charge for every exam, evaluation, and remedy. This is not to say that HBOT does not hold financial incentives as it can lower the costs of treatments of injured active service members by nearly half a million dollars.

Although the presence of any benefits of HBOT should theoretically be enough to encourage individuals to shed more light on its usage, HBOT does not receive enough attention and therefore has not gained notice as having success in treating particular conditions. Hyperbaric oxygen is key to relieving stress on the brain brought on by trauma. Hyperbaric medicine has been linked to increasing neuroplasticity and improving overall quality of life by providing the brain with increased levels of oxygen that assist in cellular restoration and recovery. In its very essence, hyperbaric medicine improves neurological function and healing and subsequent research could extend its reach on other conditions, as well as allow it to gain awareness and prominence.

Previous Article Stress and the City: How Life in an Urban Environment Can Lead to Schizophrenia
Next Article Bell’s Palsy
Medical Dialogue Reviewis is a peer-reviewed journal which aims to reflect the diversity of medicine by enabling students to publish their articles and artwork on healthcare.