In 2012, the United States spent $2.9 trillion—approximately 16.9% of the country’s GDP—on health care, which is approximately $9,255 per person. In the same year, Australia spent only 9.4% of its GDP; Germany, France, and Switzerland spent approximately 11.5% and Canada spent 10.9% of its GDP on health expenditures (The World Bank). With such a large proportion of its GDP devoted to national health, the United States would be expected to have a health advantage, such as improved health care access and lower cost services. However, most studies indicate that Americans suffer from a health disadvantage compared to individuals in similar high-income countries (Kelley). Despite its place among the wealthiest and most developed countries in the world, the United States utilizes a health care system that is consistently ranked last in regards to efficiency, equity, and accessibility. Accessibility is perhaps the most pressing concern. It is often used to assess a country’s health care system, and a deficit signals that steps must be taken to move towards a more centralized system.

As a result, health reform debates have gained traction in the political theater, especially since the Affordable Care Act was signed into law during the first term of the Obama administration. Legislators and scholars alike are in search of new policy formulations that will address the United States’ ironic and tragic health care inefficiency. The current state of the U.S. health care system is inefficient because it is wasteful and misallocates financial resources and human capital, rendering its current structure unsustainable. For a country that spends more of its GDP on health care than any other, it is apparent that the U.S. has a severe efficiency problem, which is predominantly the result of its employment-based coverage system and cost-related accessibility issues. With national health expenditures already at an ever increasing high, it is imperative for the United States to find a timely alternative.

A report published by The Commonwealth Fund shows that the United States has the worst cost-related access problems when compared to ten other wealthy, developed countries (Figure 2). Unfortunately, the United States’ poor health care rating is not a recent or isolated issue. In previous studies conducted by The Commonwealth Fund, the U.S. health care system ranked last among other comparable nations in 2014, 2010, 2007, 2006, and 2004, particularly in dimensions of access, efficiency, and equity (Davis, Stremikis, Squires, and Schoen). In fact, U.S. health insurance coverage has remained relatively stagnant in the past two decades, with only 15% of the country’s population having some sort of coverage, as shown in Figure 1 (Schiller, Ward, and Freeman). The United States’ health care access problem is fundamentally attributed to the system’s high costs, an observable side effect of its current employment-based coverage system.

The United States is the only developed country that has not yet adopted universal health care. It comes as no surprise that more citizens and legal residents in the U.S. go without necessary health care as a result of the cost more often than people in other countries. Indeed, 37% of American adults are reportedly forgoing a recommended test, treatment, or follow-up care as a result of cost (Davis et al.). The country’s unwillingness to transition towards universal coverage is hampering the effectiveness of its health care. For instance, the currently popular employment-based health insurance system excludes the poor, disabled, elderly, and unemployed. Between 2009 and 2010, only 48.1% of unemployed adults aged 18 to 64 had health insurance (Enthoven and Fuchs, Driscoll and Bernstein). The United States’ health care system is thus inherently inefficient and provides poor access to coverage for those who need it most. Faced with such alarming access and coverage issues, it is important to identify the specific aspects of employment-based health insurance that make it so incompetent.

Second, an employment-based health system inhibits labor mobility and distorts labor-market decisions by individuals and firms. In fact, the very formation of the U.S. employment system was meant to deter workers from leaving their workplaces to find potentially higher wages somewhere else. Firms relied on their provision of health insurance as a bargaining chip. Employers not only attempted to pass on insurance costs to employees by lowering wages, but also retained artificially low wages by barring themselves from wage competition with other firms (Budetti).

Lastly, there are fundamental economic and structural flaws in basing health care coverage on employment. People lose their health insurance when they lose their jobs, and those individuals who are unable to work in the first place have no chance at holding onto any coverage (Budetti, Enthoven and Fuchs). An employment-based system creates an environment that inherently lacks stability in health coverage.

However, it would be unjust to place the entirety of the blame on the U.S. jobbased health insurance system for the country’s health care inefficiencies. A common medical practice known as defensive medicine refers to the act of recommending a diagnostic test or treatment that is not necessarily beneficial for the patient, but serves to protect the physician against legal scrutiny. By employing needless tests and procedures, health costs for patients will also be needlessly high. Moreover, the use of additional tests can serve a profit motive as well. Referred to as profit-seeking, physicians can utilize unnecessary tests to increase their revenue, which not only damages the physician-patient relationship, but exacerbates the problem of health care access. By creating conflicts of interest, the physician diminishes the quality of care being provided and erodes the public’s trust in the medical profession while also creating potential financial obstacles to needed care. Ultimately, several factors contribute to the excessively high cost of U.S. health care, but a single institutional shift could begin to address these structural problems.

While a plethora of issues inhibit the effectiveness of the U.S. health care system, universal coverage would be a worthwhile solution, as access to health care would improve and projected costs would fall as well. In discussions of health care reform, the Canadian system is often held up as a potential model for the United States. Much of the appeal of the Canadian single-payer, mostly publicly-funded system is that it appears to do more for less. Canada provides universal access to health care for its citizens, which contrasts heavily with the fact that about one in five non-elderly Americans are uninsured. As mentioned earlier, Canada also spends far less of its GDP on health care: 10.9% in 2012, versus 16.9% in the U.S. (O’Neill and O’Neill, Kelley). Each Canadian province administers and manages their respective universal health insurance programs, covering all provincial residents according to their own residency requirements. One of the interesting aspects of Canada’s brand of universal health care is that there is no nationally defined statutory benefits package. Instead, a majority of the public coverage decisions are made by provincial governments in conjunction with medical professionals. Because each province has varying levels of additional benefits, two-thirds of Canadians purchase additional private health insurance to cover services excluded by the public programs. The basic health care benefits provided by the Canadian government are publicly funded; in 2012, 70% of total health expenditures came from public funding, which included provincial and federal taxation, government contributions through the Canada Health Transfer, and grants. 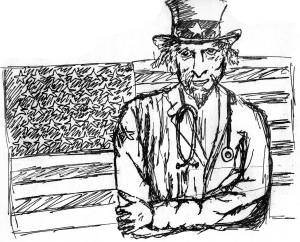 The United Kingdom is consistently praised for having one of the most accessible, affordable, and high quality health care systems in the world. If the United States hopes to eventually improve the status of its currently inefficient health care system, the country could learn a lot from the UK. The centerpiece of the UK’s health care system is the National Health Service (NHS). Launched in 1948, the NHS provides universal coverage, which includes access to care without discrimination and within reasonable time frames for emergency and planned hospital care. With the exception of prescription drugs and optical and dental services, the NHS in England remains free at the point of use for all UK residents. Currently, the NHS covers more than 64.1 million people—the entire UK population (Mossialos et al.). The NHS also employs over 1.6 million people, placing it in the top five of the world’s largest workforces (About the National Health Service). However, with such a massive workforce and efficient, quality health care, the NHS requires a substantial source of funding. The UK’s NHS is directly financed through taxation; in 2012, the UK spent about 9.3% of its GDP on health care, 84% of that spending was dedicated to public expenditure, namely the NHS (About the National Health Service, Mossialos et al.).

Increases in income and corporate taxes are imperative to the functionality of a universal health care coverage system. Because taxes are historically unpopular in the United States, it is not unreasonable to conclude that this aversion to the idea of increasing taxation to fund health care plays a significant role in hampering progress toward universal coverage. Theoretically, the U.S. would benefit from a universal health care structure; however, the cost of designing a brand new system and the time required to simply facilitate the political process are great. The United Kingdom’s health care system, and Canada’s, to lesser degree, are appropriate models for the United States to emulate. Unfortunately, the transition costs and social dislocations in discarding the existing system will likely prevent a shift towards universal coverage (Hyman and Hall). It may be unsatisfying to settle for an imperfect and inefficient system simply because it is so firmly established, but it is not impossible to improve America’s employment-based health care system. The introduction of new legislative market-enhancing initiatives, such as the Affordable Care Act in 2010, can improve health care access despite the US’s current non-universal care system. 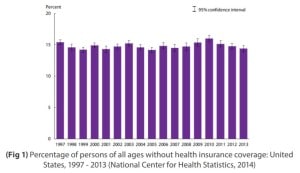 The current state of United States’ health care system is arguably the primary inhibitor to the country’s economic performance. It has been an easy target in recent presidential campaigns and continues to be a common subject of criticism both domestically and abroad. The U.S. health care system is the most expensive in the world, yet it underperforms relative to other countries in very important measures such as access, efficiency, and equity. The tragedy of American health care is that it may be a system too unique and established to undergo a transformation as extreme as adopting universal health insurance. As imperfect as the current system may be, most employees indicate that they would prefer if their employers continued their role in selecting health insurance (Hyman and Hall, 2002, p. 21). While most of the health reform debate has been focused on the employment-based health care structure, perhaps it is time to focus on improving social programs for those who cannot work. Labeling the U.S. health care system as unfixable may seem futile and underwhelming, but an improved system with components of universal health care would requirehigher taxes and increased federal government oversight and intervention. Such alterations to the fabric of the United State’ political economy are historically and politically unpopular to such a daunting extent that changes to the current system would be nearly impossible. In the meanwhile, a very gradual shift that systematically introduces elements of universal health care may garner more support from the American public. By informing the masses on the benefits of universal coverage while also implementing small changes overtime, an eventual institutional change may take place, allowing the United States to adopt a system comparable to that of the United Kingdom.

Previous Article Bloody History of Barber Surgeons
Next Article The Future is Now
Medical Dialogue Reviewis is a peer-reviewed journal which aims to reflect the diversity of medicine by enabling students to publish their articles and artwork on healthcare.