The brain has always been regarded as an enigma. Consequently, the field of neural science has always been stigmatized as coming up short, providing only cursory answers to questions that seem to run much deeper and could, perhaps, be answered in a few lifetimes but never in ours. However, this may no longer be the case. In the context of sensory decision-making, neural scientists are finding answers to questions that have baffled humanity for millennia. Piggybacking on the success of visual systems research, scientists are beginning to undertake the study of more complex modalities, such as olfaction, using exciting new methods such as computational modeling and optogenetics, the use of light to control cells in living tissue, typically neurons, that have been genetically modified to express light-sensitive ion channels.

The mechanism by which raw odor chemical inputs to glomeruli are processed into olfactory-mediated decisions is still unknown; however, decision-making related to the visual system is well studied, and can be used to inform research on olfactory-mediated decisions. A common framework for studying visual decision-making is a serial and sequential accumulation of evidence until an odor hypothesis is made (Fig. 1A). Shadlen et al. investigated evidence accumulation in visual systems via the random dot motion paradigm.3 While recording from the middle temporal (MT) area, associated with motion perception, and lateral intraparietal cortex (LIP), associated with eye movement, Shadlen presented randomly moving dots on a screen to a head-fixed macaque monkey. The dots presented on a trial-by-trial basis were relatively biased for a chosen direction (left or right), which was described by the trial’s respective motion coherence (C) — the ratio of left to right moving dots. The macaque monkey was trained to respond to the direction in which the majority of dots were moving— a task that becomes more difficult with smaller motion coherence. A saccade, or rapid eye movement, to a single direction indicated the formation of a decision as well as trial termination, and provided a measure of target accuracy and reaction time (Fig. 1B).

Figure 1: (Shadlen at al. 2007) (A) Evidence-accumulation framework. Sensory input is sequentially fed into a decision accumulator variable and used to weigh the relative probability of competing perceptual hypotheses. (B) Random dot motion paradigm. Head-fixed macaque monkeys fixate to the center of a screen, are cued with two target saccade choices, and presented with dots of random left or right motion with a directional bias parameterized by motion coherence, C.

Shadlen developed a sequential analysis model drawing from a Gaussian (bell curve) distribution centered on an average (arithmetic mean) proportional to the trial motion coherence (Fig. 2, gray inset). This was fit to the behavioral data suggesting a correlation between decision formation modeled by evidence accumulation and motion coherence (Fig. 2). An evidence accumulator is a function that parameterizes the summation of evidence independently drawn from the Gaussian distribution. This accumulator is weighed against two competing hypotheses bounds in the race random walk model.

Figure 2: (Shadlen at al. 2007) Random walk model with positive and negative bounds of equal magnitude. A model which represents the accumulation of an abstract decision variable to a decision bound (H1 vs. H2). Input to the decision variable is drawn from a Gaussian distribution with mean centered on trial motion coherence.

Finally, the neural recordings from LIP and MT were fit into the random walk model to determine the neural correlate of the decision variable abstraction. The increase in mean firing rate in LIP was temporally consistent (when accounting for motor and sensory delays) with the decision to saccade to a decided direction (Fig. 3, solid lines). An increase in motion coherence produced a faster initial firing rate increase. Additionally, saccades to the direction opposite of the receptive field of these neurons produces a decrease in firing rate, consistent with expectations of the neural correlate of the decision variable (Fig 3, dotted lines). Recordings from upstream area MT showed an increase to a persistent mean firing rate, synonymous with increasing the Gaussian mean of model evidence accumulator (Fig. 3, gray inset). Shadlen hypothesized that evidence inputs consolidated in area MT and fed downstream to area LIP where increased firing rate correlated with decision formation. In other words, the function of MT is abstracted by the Gaussian distribution in the sequential analysis model in that it serially provides evidence inputs to the decision accumulator, which summates evidence for a specific hypothesis. In this case, since the two weighed hypotheses involve eye saccades, the decision variable is thought to be an abstraction of area LIP. Using computational modeling, Shadlen effectively correlated a mechanism by which decision formation may occur in the visual system. 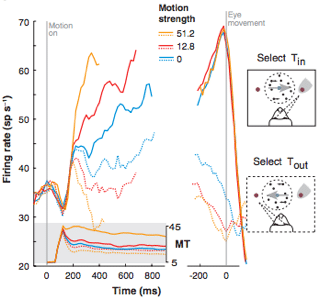 Figure 3: (Shadlen at al. 2007) Area LIP neural recording relative to timing of motion presentation (left, 0) and eye saccade (right, 0). Increased motion strength (coherence) corresponded to increased initial rise in mean firing in LIP neurons from inside the decision receptive field (Tin) rate prior to time of decision indicated by eye saccade. Additionally LIP recordings from outside of the receptive field (Tout) ramped down in mean firing rate as if to a negative decision bound corresponding to the acceptance of the alternative hypothesis.

An intuitive mechanism for explaining odor identity perception suggests that a percept is determined by serial accumulation of afferent signals as evidence for an odor hypothesis; however, the claim that odor identity is matched against a seemingly infinite template of neural activation to determine the odor percept is also conceivable. Ma et al. presents psychophysical behavioral data that takes into account stimulus uncertainty in decision-making in “nearly Bayes-optimal way.”4 In terms of olfaction, this would mean that the OB has a non-discrete template map for all possible percepts integrated against some probability distribution. Furthermore, Carleton et al. has demonstrated experience-dependent plasticity within afferent olfactory inputs correlates to degree of associative learning in the adult mouse.5 A mutable, infinite template further complicates interpretation of psychophysical results, and whether it better explains olfactory-mediated decisions better than the serial accumulation model remains to be demonstrated.

The fundamental goal of sensory systems is to generate meaningful internal representations of the external world, enabling organisms to react in dynamic environments. Sensory circuits first encode primitive features (evidence) to object representations by integrating meaningful feature combinations (shapes, sounds, odors). In the heart of olfaction lies the central question: how do we perceive odors? But within this are several, philosophically confounding sub-questions such as: what is an odor, which odors can we detect and for what purpose? Ultimately, the study of olfaction will result in a proliferation of new technologies, such as high fidelity chemosensors for reliable detection of specific compounds in small concentrations, but, more importantly, a deeper understanding of life through the lens of the most ancient sensory apparatus.

Previous Article Marijuana in Medicine: Research that is Changing Lives
Next Article Traumatizing Consciousness During Surgery
Medical Dialogue Reviewis is a peer-reviewed journal which aims to reflect the diversity of medicine by enabling students to publish their articles and artwork on healthcare.