Neurodegenerative diseases are often chronic and progressive in nature, resulting from the malfunction and death of vital nerve cells in the brain. Dying neurons produce dopamine, a chemical messenger that, among other things, sends signals to the parts of the brain that control movement and coordination. As these diseases progress, the amount of dopamine produced in the brain decreases, leaving a person unable to control his or her movement normally. As a result, those suffering from neurodegenerative diseases often experience tremors or falls that can negatively impact overall health and quality of life. To combat disease progression, experts often prescribe general exercise, which keeps muscles agile and has been shown to help patients with symptom management and sometimes even slow disease progression. Dance, in particular, is a unique form of exercise that requires one to learn and memorize combinations before internalizing the movements and repeating them independently. These processes activate neuro-protective mechanisms in the brain because dancers are required to actively engage both hemispheres as well as the memory and control centers. Recent research has shown that dance is not only a physically rewarding art form, but also a figurative antidote that exhibits healing properties for those suffering from neurodegenerative diseases like Parkinson’s and dementia.

Various forms of dance are physically rewarding as they offer both psychological and social outlets for expression. Dancing works on the whole body through complex movement that cultivates interaction between different areas of the brain. In turn, these forged connections stimulate a “mind-body” relationship that works in distinct, regenerative ways. As such, dance has become a common form of physical and mental therapy for Parkinson’s disease and dementia specifically.

A commonly known neurodegenerative movement disorder, Parkinson’s Disease (PD), is often characterized by tremor, rigidity, and stiffness of the limbs. Based on the nature and fall-rate for PD patients, it is generally recommended that they exercise in an environment where there are others around who could help if necessary. Partner dancing, such as tango, can therefore serve as a non-traditional treatment to improve cognition, balance, and gait, while also improving quality of life factors. Emory University researchers conducted a case study in order to “evaluate the feasibility and effects of partnered tango classes on balance, endurance and quality of life in individuals with severe PD.” 1 For 10 weeks, the participants attended 20 one-hour tango classes that were moderated for patients with PD. Various cognition, balance, and gait factors were evaluated before, after, and one month following the dance intervention. Upon completion of the study, the analysis suggested that the participants improved their fine and gross motor skills according to various Parkinson’s disease rating scales. Participants also reported having increased balance confidence and an overall improved quality of life.

Increased balance confidence is significant for PD patients because often times their falls lead to other significant health problems. Human nature prompts one to fall on larger muscle groups rather than smaller ones seeing as they are presumably stronger. However, based on the location of these muscles, it becomes very easy to injure other ligaments and joints in close proximity. It is, therefore, important to learn to fall with ease in order to reduce impact and essentially lubricate joints. These learned, graceful falls thus tend to be less damaging to overall health. Furthermore, evidence has shown that fear of falling may actually increase fall occurrence by causing high muscle tension and overcorrection errors. 2 As such, greater balance confidence becomes increasingly important. David William Merchant, a professional dancer who worked closely with the previously mentioned Emory researchers, suggests from personal experience that “the secret to balance is becoming at ease with falling, fluidly oscillating between falling and recovering, a principle [he] learned in techniques [through] mid-century modern dance.” 3 Not only does dance incorporate learned movement in neuroprotective ways, but the art of dancing can seamlessly teach PD patients important skills when it comes to falling and fluidity. The research presented by Emory University and David William Merchant clearly specifies the variety of healing mechanisms associated with PD. Aside from improved cognition, balance, and gait, dance can improve fear of falling and falling fluidity, both of which are exceedingly helpful in overall health and quality of life for PD patients. 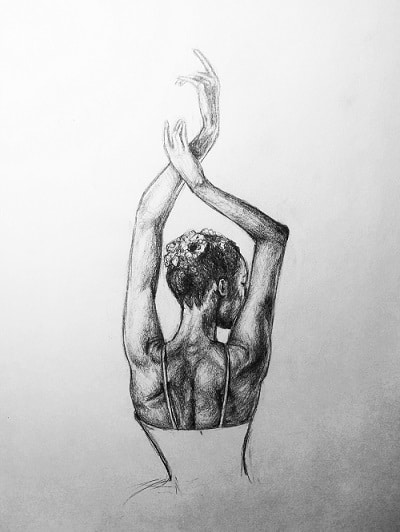 Unlike Parkinson’s Disease, which is a neurodegenerative disease marked by movement digression, dementia is a chronic and persistent neurodegenerative memory disorder marked by personality changes and impaired reasoning. Dementia, an umbrella term, incorporates various types and stages of memory loss, differing greatly from PD in a neurological context. Nonetheless, those suffering from dementia can still reap the neurological benefits associated with dance and movement. Arts-based and creative approaches to dementia care are more commonly used as alternative treatments because they have been proven effective and lack the negative side effects traditional memory-enhancing drugs present. More importantly, dance, as opposed to other forms of art, becomes embedded both within the body and mind, and allows one to foster deep personal connections that can improve memory, mood, and brain plasticity. Brain plasticity refers to the brain’s ability to change throughout a life span by forming new connections with other neurons via dopamine receptors. A recent study developed by Canada’s National Ballet School and Baycrest Health Sciences sought to bridge the gap between the arts and the sciences by creating a dance intervention program for aging populations diagnosed with dementia-related diseases. Their goal was to produce long-term, non-drug reliant care for elders. Fundamentally, the relationship between dance movement therapy and dementia yielded three impactful results: improved emotional cognition, improved memory, and a decreasing frequency of behavioral signals which were regarded as problematic. 4 Clearly, while the arts have huge cultural and historical value in our society, they have seemingly started to make scientific advances as well. Dance not only provides various outlets of expression, but has also improved the mood, memory, and overall quality of life of dementia patients.

As seen with PD and dementia, dance has a number of neuroprotective benefits and can be regarded as an effective, non-traditional treatment option. It strengthens social ties and emotional integration, culminating in a higher quality of life for patients afflicted by the diseases. It has been noted by these various studies that quality of life often parallels the quality of symptoms, an important fact to take into consideration when prescribing drugs that do not often lend themselves to social or emotional interactions. Aside from patient’s general enjoyment of their trials and higher quality of life ratings, improved cognition, balance, gait, memory, mood and brain plasticity are all amongst the positive effects that dance intervention therapies can be credited with. As such, it is imperative that researchers begin to offer similar non-traditional remedies for people who suffer from neurodegenerative diseases and seek alternative options. From a medical standpoint, bridging the gap between the sciences and the arts is imperative.